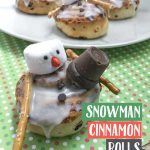 Looking for a fun way to surprise your kids for breakfast? These Melting Snowman Cinnamon Buns are certain to please!

Starting the day off with a healthy breakfast is important, but sometimes…you just gotta have a cinnamon roll (or two!) to add to the mix. What better way to make an edible and adorable treat than with these melting snowman cinnamon buns. Seriously, they are just too cute.

Perfect for winter but even more fun when there happens to be an actual snow day! Imagine your kiddos getting all bundled up to head outside and play in the snow, only to come back in from the cold and have these delicious Snowman cinnamon rolls waiting for them? Best breakfast ever!

And honestly, if you want some help in making these fun breakfast treats, your kids will probably be more than happy to help! Everyone knows that the cooks get to taste test along the way, right?

How cute are these? What a fun way to start the day for the kids! They’ll love having their noses waking up to this smell and their bellies getting full as well.

All you need to get started is listed below. You’ll find the entire printable recipe with all the measurements and full directions listed below.

The easiest part of this recipe is that you get to use premade cinnamon roll dough as your base. And while you could totally use homemade dough if you wanted, that’s just something that I usually don’t have time for so I opt to try something different.

It’s also fun to just buy the premade dough at the store knowing that you’re going to be able to create something tasty and simple for the kids. Because when it comes to something sweet like this, we’re all impatient in how long it’s going to take!

Don’t forget to check out these Simple Snowman Cupcakes!

The kids can really help out with most of this simple recipe. Make certain that you’re aware of the temperatures of the hot rolls as you take them out of the oven because that is probably the most worrisome part.

You might also want to help with adding on the pretzel arms if you’re worried that they’re going to burn themselves.

Besides that, the rest is just really, really fun. They’ll love being able to cut the marshmallows in half to give their snowman that melted look.

And once they add that marshmallow on to the top, they’ll start to see the vision coming true.

Next they’ll have to add on his hat and face, which is all part of the fun. The really cool part about this simple treat is that no two are going to look the same.

They’ll be melty in all different directions but will still taste amazing no matter what.

It’s going to be hard to eat just one, right? It’ll be fun to see how everyone eats their rolls, too. Will they eat the snowman first or last?

Don’t worry…if you play your cards right, you may be able to eat one now and later with the leftovers! If there aren’t any leftover, then you know that this recipe is a hit and you need to make it again in the future.

2. Take 2 pretzel sticks and place them on the cinnamon roll, one across each side. (acting as arms)

3. Cut marshmallows in half across the middle. The sticky side will be the bottom of the head. Take a toothpick and use it to pierce a hole in the side of one half. Press an orange candy-coated sunflower seed into the hole. Add two dots with the black gel icing to each side of the sunflower seed. Place the marshmallow head on the cinnamon roll.

4. Press one Rolo Caramel candy against a mini chocolate-coated OREO cookie. There should be enough fudge on the OREO to hold the Rolo candy. If not, rub the Rolo candy against your warm baking pan and then press to the OREO. Position the “hat” on the snowman.

5. Add 3 mini chocolate chips to the top of the cinnamon roll to resemble the snowman’s buttons.

6. Serve immediately or refrigerate in an airtight container.

Want to try this recipe?

Save this recipe for later.